Blockchain – is it a future of fintech?

The words of the crypto currency and the blockchain, which were known by a few only several years ago, are now everywhere. In this article, we will take a closer look at the fundamentals of the technology, consider the variants of its application, and outline possible ways for the development of blockchain.

This kind of public attention can be explained by two factors: the high cost of Bitcoin’s crypto currency and the complexity of understanding the basics of technology. The history of the appearance of the first digital currency and underlying P2P technology will help us to understand these “cryptogjunglies”.

There are two definitions of the term Blockchain:

Both definitions are true, but they do not answer the answer the question of what it is. For a better understanding of the technology, it is necessary to remember which computer network architectures exist and which one dominates the modern IT market.

There are two types of architectures: 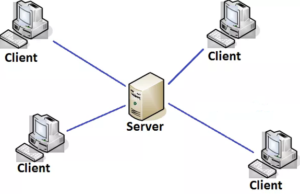 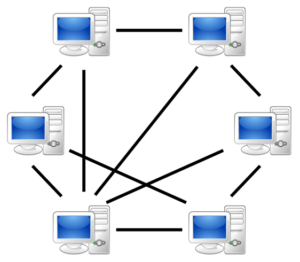 The first type of network architecture assumes centralized control of everything: applications, data, access. Logic of a system and information are hidden inside the server, which allows reduction of requirements to performance of client devices and ensure high processing speed of data. This is the most used method today.

Peer-to-peer or decentralized networks do not have a main device, and all participants have equal rights. In this model, each user is not only a consumer, but becomes himself a service provider.

An early version of peer-to-peer networks is distributed messaging system USENET which was developed in 1979. The next two decades were marked by the creation of P2P (Peer-to-Peer) applications in completely different spheres. One of the most famous examples is the Napster service – the once popular file-sharing peer-to-peer network or BOINC – a software platform for organizing distributed computing, as well as the BitTorrent protocol, which is the basis of modern torrent clients.

Systems based on decentralized networks continue to exist, but noticeably lose to client-server architecture in numbers and in relevancy to consumer needs.

Most of applications and systems require functionality to operate a set of data. There are a lot of ways to organize such work, and one of them uses peer-to-peer network architecture. Distributed, or parallel, databases store information on each device of P2P network.

One of the advantages of this approach is the availability of data: there is no single point of failure, as in the case of a database located on one server. This approach also assumes certain restrictions on the speed of data update and speed of distribution of information among the network participants. Such a system will not stand the load of millions of users who constantly submit new information.

Blockchain technology involves the use of a distributed database of blocks which represent a linked list (each next block contains the identifier of the previous one). Each member of the network keeps a copy of all operations performed for all time. This would be impossible without certain innovations designed to ensure the safety and efficiency of the network. This brings us to the last “pillar” of blockchain – cryptography.

At the end of the 20th century, a community was organized that was interested in developing anonymity and security in the network through the development of new cryptographic methods. They believed that the only way to keep privacy on the network is to encrypt data. The first attempts to develop digital currencies refer to the very beginning of the 2000s.

The first version of the digital currency was created by Wei Dai and was called b-money. The next attempt was Bit Gold, developed by Nick Szabo. Both currencies had a big drawback – the imperfection of the decision-making system among remote members of the network.

The date of birth of a full-fledged crypto currency – Bitcoin is 2008, when Satoshi Nakamoto, assembled the work of like-minded people, published open access scientific work describing the main elements of the blockchain: the principles of functionality and the mathematical model of the network. The author from the very beginning emphasizes the purpose of the work – creating a new way of irreversible transfer of funds (transactions) between people without intermediaries.

After studying the main components and history of technology creation, it’s time to finally bust the myth associated with the word “blockchain”. Let’s take a simple example of digital currency exchange and see how it works without computers.

Suppose we have a group of 10 people who want to be able to make currency exchange operations outside the banking system. We will review sequence of actions taken by participants in the system, where the blockchain will be represented by ordinary sheets of paper:

Each of the participants has a box in which he/she will add sheets with information about all the transactions made in the system.

2. The moment of the transaction

Each participant has a pen and a sheet of paper and is ready to record all the transactions that will be made.

To make this transaction, participant number 2 announces to everyone: “I want to transfer 100 USD to number 9, so make a note on it on your sheet.”

After that everyone is checking whether participant # 2 has sufficient balance to complete the transaction. If he/she does then everyone makes a note about the transaction on their sheets.

After that the transaction is considered completed.

Over time, other participants also may want to make exchange transactions. Participants continue to announce and record each of their transactions. In our example, 10 transactions can be written to one sheet, after which it is necessary to postpone the completed sheet to the box and take a new one.

4. Adding a sheet to the box

The fact of putting a sheet in a box means the agreement of all participants with the validity of all the transactions performed and the impossibility of changing the sheet in the future. This is what ensures the honesty of all transactions between participants who do not trust each other.

The last stage is the general case of solving the problem of Byzantine generals. In the conditions of interaction of remote participants, some of whom may be intruders, it is necessary to find a winning strategy for everyone. The process of solving this problem can be viewed through the prism of adversarial models.

The adversarial models are understood as the situation of finding of a malicious group among the participants, which would like to exploit the vulnerability of double spending (write-off of funds for two accounts and the subsequent cancellation of an honest transaction). There are the following categories of models:

Selected adversarial model of blockchain determines the way of getting a reward for creating a new block. We have already analyzed that the block is a distributed database consisting of blocks. The complexity of adding new blocks is determined by the adversarial model:

In a sense the key feature of the blockade is the elimination of the human factor – the responsibility for the reliability of operations is on mathematics and computers, which are much more reliable.

More information about the principles of blocking technology can be found in the article WTF is the Blockchain?

Cypher-punks initially intended to create a crypto currency that would not depend on a third party and would have the properties of a cash currency in the electronic world: an instant exchange of funds for a product or service. Blockchain technology was developed for this purpose. And this technology allowed us to rethink how we solve problems in other areas.

The use of crypto currency for payments was the first use case of blockchain technology and was widely used in black and non-regulated markets. The goal of the creators of the first digital currencies was achieved, this is not the preferred method but for a normal consumer. Blockchain (by design)is much more convenient for sellers, than for buyers:

Blockchain technology allows you to create distributed applications on its basis. The code of the applications is executed on the machines of participants of blockchain network. The principle of  smart contracts is very simple: If A happens, do B.

This allows you to make contracts in the form of executable code, which will be executed in any case: it is protected from human factors and violations of rules. Errors in the development of the interpreter of smart contracts can be avoided using open source software.

Since blockchain is actually a distributed database, it can store any information, not only records about transactions. This approach will ensure the reliability and availability of information to all members of network at any time. However, in distributed data storage systems based on blockchain, data is encrypted and distributed among network nodes. This makes the process of updating data very slow and unreliable.

Eliminating a control device between users of network allows implementation of a fair voting model based on a blockchain where fraud is impossible.

For example, the Ethereum website has detailed instructions for setting up a distributed autonomous organization based on its network. The resulting distributed application can be used to manage assets not only of Ether currencies, but of any others.

Application of the blocking technology

It is important to understand when the blockade is necessary and not try to use it absolutely in all areas. Such a desire can be understood – the technology is incredibly curious and has a great potential.

Many critics of the blockade say that over 10 years of its existence no one has devised a killer app, an application that would conquer the market and become widely used. Perhaps such a system using only a block system will never appear, but its niche and narrow scope will be found.

Development and support by companies

Many companies are interested in studying and developing of blockchain technology. For example, in VMware a whole research department was created, which examines the impact of blockchain on the area of ​​financial technology. They have formed their unique vision, which is based on five points:

We strongly recommend all researchers to read the publications of VMware who wants to know more about the work of the blockchain and the future of this technology.

In addition, for VMware users, a ready-made BlockChain on vSphere solution is available, which allows to create your network in a few easy steps.

In 2015, the Linux Foundation group founded the umbrella project for open source software for blockchain and related tools – HyperLedger, which is designed to support the joint development of distributed ledger technologies based on blockchain.

The HyperLedger project also has its own research center, which accumulates the experience of many companies: from the consulting and financial sector to IT giants.

NEO is an open blockchain for smart economy. Creators aim to develop the ecosystem of smart contracts based on their network.

At the heart of NEO is the Proof-of-Stake model, which allows you to achieve up to 10,000 transactions per second. Neo’s crypto currency is used as a pledge, and NeoGas is used to pay for transactions, which is created when new blocks are received and distributed among the owners of Neo.

If we’re talking about financial instruments, Bitcoin, being the first mass crypto currency, clearly demonstrated how it is possible to play by the new rules without intermediaries and centralised management. However, perhaps even more important result of the appearance of Bitcoin was the creation of blockchain technology.

As we discussed above, the blockchain by its nature is not the answer to all the problems, so most of the start-ups implementing this technology are likely to disappear soon. But it is the blockchain mechanism, as technology, that allows to organize the interaction of remote participants without a controlling center and where it is in demand, this technology will be a perfect fit.

Published in Blockchain and Trade