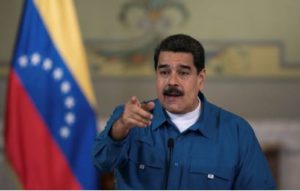 President of Venezuela Nicholas Maduro against the backdrop of the successful launch of Petro said about the imminent creation of another digital currency, which will be provided with gold. Previously, it was assumed that Petro will be provided with oil, gold and diamonds, but as a result, only oil became the basis.

The head of state announced the creation of a new cryptocurrency the day after the launch of the pre-sale “Petro”. “Golden Petro” will appear next week.

“I do not want to rush things. However, we have prepared a surprise regarding the “golden Petro”, which will have the same parameters as the oil, “said Nicholas Maduro.
Recall, the launch of sales of petroleum “Petro” occurred on February 20. Already on February 21, the pre-sale volume reached $ 735 million. Venezuela became the first country with its own cryptocurrency.

Nicholas Maduro ordered to begin the registration of consular services in the embassies of Venezuela in all countries in Petro. He also instructed to purchase fuel for aircraft in the crypto currency. It is assumed that in the future it will be possible to use Petro to pay for tourist services.